I decided to head down to Geylang to buy Lei Cha. Its supposed to be a Hakka dish. I'm a hakka! But i've never tried it before!

Its located at Geylang Lor 19.

and there.. Hakka Lei Cha! 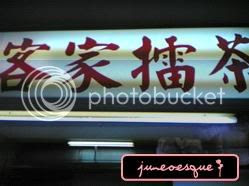 The auntie was very nice. She asked if i was buying it for the first time and she clearly explained how i should eat it. She even gave me a namecard. They even have a website!


I bought 2 packs home. One for myself and one for Ping jie jie who's been dying to try it as well.

According to the auntie, i was to add hot water to the greenish sauce (consists of mint and i cant remember she told me wat ingredients) to dilute it. 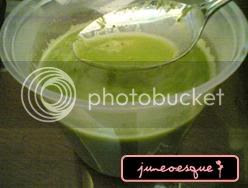 Den being a first timer, i shouldnt pour the whole sauce over my rice. I should dip it bit by bit. If im not wrong the green sauce is the Cha ie. tea. The smell is not exactly very appetising but very special.

The rice wise, its really very very filled with tons and tons of vege! 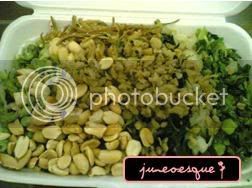 So much dat i can barely find the rice underneath. haha... But its very filling! The taste is alright. Edible i would say. According to the auntie, its supposed to be good for health n complexion and i cant remember wat if u eat it regularly. Woo~
Posted by Junie at 6:21 PM No comments: 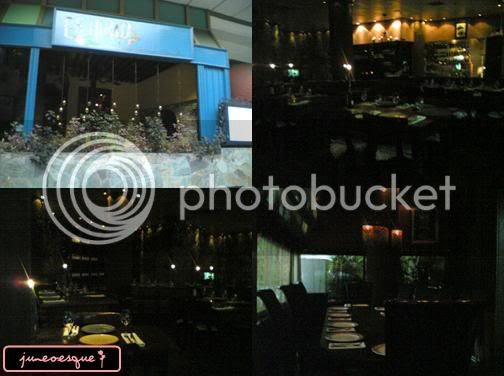 Esmirada had a wonderful ambience and settings. We were there pretty early and when we got there, the manager was still addressing the staff. The hostess was a caucasian whos very friendly. However, the servers, i won't say they are rude. They were ok but not totally polite. One actually kneeled down while taking our orders, another was chatting around while serving us. Rather, maybe for the price and place we were kinda expecting better service. 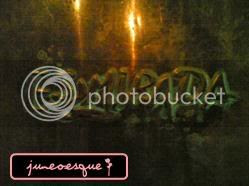 The first page wrote... "Enter the enticing world of Esmirada" 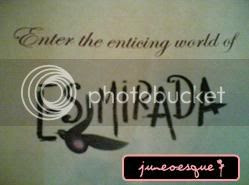 We ordered a seafood soup. One serving and the server was nice enough to seperate it into 2 portions for us. 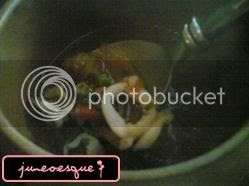 It was tomato based, not bad. Ingredients i would say, pretty fresh. Overall, i like it. Price is ard $10.

Den comes our main course, some mixed griller platter for 2.

There was king prawns, beef fillet, chicken fillet, lamb chops and potato wedges. Nicest was their potato wedges. Quite different from usual ones - not as dry. Very nice! Meina and myself liked it alot. The beef and chicken was quite nice as well, tasty enough. But portion was too small for its price. Lidat $80 neh! Feels abit overcharged.

They came along with 3 kinda sauces. First one was some cucumber garlic something which is my personal favourite. Second one's some salsa sauce. Third one's some minty yoghurt which we both didn't like. Meina felt it tasted like some facial scrub. Haha! She even tried to ask for chilli sauce.

When we were done with our main course, the server came over asking if we wanted dessert and he recommended Melting Moment. Meina's not one with a sweet tooth but we decided to go for it. It was a right move! 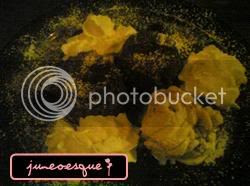 Its really quite nice! Chocolate tartlets (tasted like cakes with a warm chocolate fudge centre) baked warm served with whipped cream, maple walnut ice cream and cherries. YUM!! Even Meina liked it! Around $12.

I headed down to the airport to buy my long yearned for, Popeye Chicken.

I bought their popcorn shrimps (which was VERY NICE) and their fried chicken was ok (very normal). Their mashed potato in my view was alright but i heard from Meina its very subjective. Some loves it, some don't coz its got abit of curry taste.
Posted by Junie at 6:05 PM No comments:

I had lunch with Sonia at Megabites in school.

I had the double happiness meal which is dory n salmon grilled fish with rice. Even comes with soup of the day. Only $5.90 oki!! Not very tasty but definitely not yucky. Won't complain given the cheap price.

Sonia had cream chicken pasta. Only $4.80 i think. Damn creamy. Eat too much very ger-lard.
Posted by Junie at 6:01 PM No comments:

I havent been to Thomson for prata before. 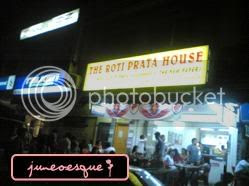 I've heard lotsa people tell me about Thomson prata but i've never had the chance to try.

I ordered their honey paper prata.... 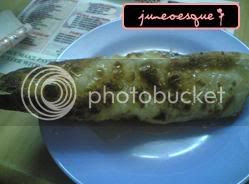 .... its so damn sweet!! Not exactly to my liking. I would much prefer Spize's Paper Prata.

and i also had their mushroom, egg and cheese. 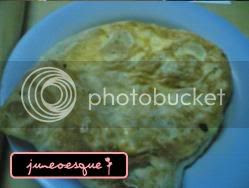 Likewise, not to my liking. I much prefer the NUS Cheese Prata Shop's Niqqi Special. With potato, cheese, mushroom and egg!
Posted by Junie at 5:57 PM No comments:

Email ThisBlogThis!Share to TwitterShare to FacebookShare to Pinterest
Labels: Prata

We were kinda planning to celebrate jo-ann's bday and i made reservations at The Ship restaurant. 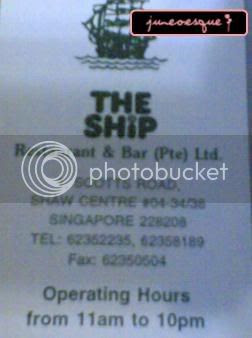 Located at a ulu part of Shaw Centre. Simple instructions would be u go to Shaw Isten level 3 and from the Polo Jeans dept, theres this opening where u can walk to the other side of Shaw Centre. From there u turn left and ... kaki try to find la!

Otherwise, u take the lift from the Shaw Centre McDonalds, take to level 4 and den again, kaki try to find la.. its around there.

Diane told me this morning, this restaurant has been around for more than 10 yrs. I first heard about this place during my JC days. My dearest Joanne has been saying she wants to bring me there for duno how many years! lol... 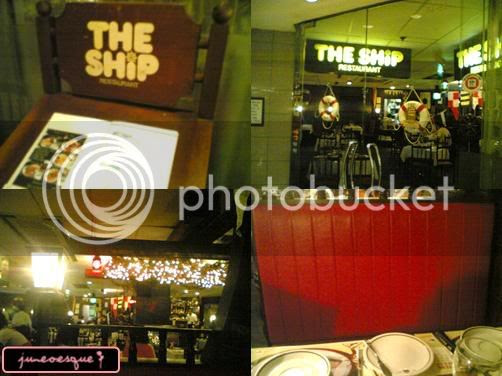 As soon as i stepped into The Ship, i got pretty much reminded to Shashlik. They both seem to have existed since our parents started dating era kinda feeling. The whole ambience and feel.
Ordered 2 soup, 2 steak, 1 escargots (strongly recommended by Diane) and 1 dessert thats supposed to act as a cake for jo-ann. 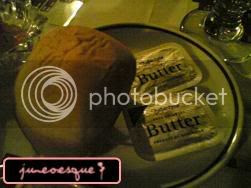 I was first served the bread and butter followed by the soup. 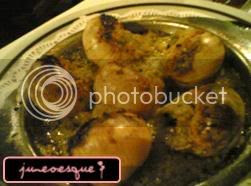 The escargots were served shortly after the soup came.

Our steak arrived after we finished the soup.

The portions were not small. Both the steak were..... YUMMMMMMMMMY! Very nice! Pricey, yes. Ship steak is ard $27 whilst King Steak is around $32. But i would think its worth the price.

After 'taking care' of the steaks, the finale arrived. Bombe Alaska. Sponge cake with peaches and ice cream covered by whipped egg white heated with over flame by the server. The menu says it serves 2. Its lying. It can serve up to 4 or 5!!! Its so huge!!!
Posted by Junie at 6:16 PM No comments:

We went over to Apollo Centre because Ginny is singing tonight at Mu Chuan and Ping jie jie agreed to accompany me down. 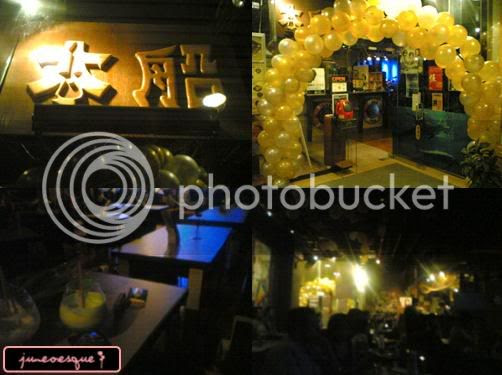 When we arrived, Ginny was already on stage singing with Weixiong (i heard he's some DJ from fm 93.3) 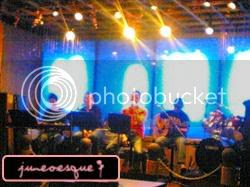 They were really great singers! Even the guitarist and pianist!

These are the drinks we ordered.

Truth be told, the first two drinks are NOT NICE! keke.. heng mine (the last one) is very nice.... hehehehehe...

The servers at Mu Chuan were all very nice and friendly especially this one boy.. very cute! Very smiley.
Posted by Junie at 5:50 PM No comments:

Email ThisBlogThis!Share to TwitterShare to FacebookShare to Pinterest
Labels: Chill

Had dinner with ping jie jie at Pepper Lunch...

She ordered the hamburger and steak combo while i ordered the Yawaraka steak. Its still VERY TENDER! though loh gong zai did a better job cooking it for me the other time.

Ping jie jie ordered miso soup which was... so so? 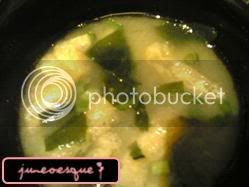 Today we went for lunch at Megabites. One of the 'higher class' food place in my school but honestly, the things are still very cheaply priced. 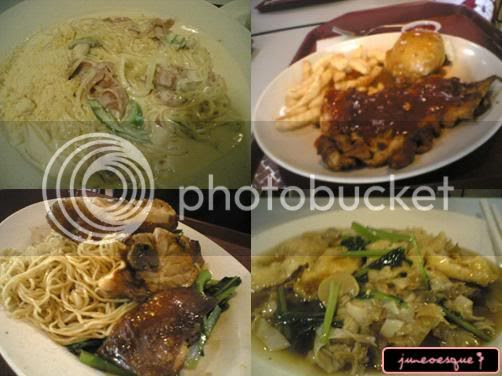 I had carbonara, Elyn had grilled chicken chop, John john had chicken noodle and Sonia had fish hor fun! All quite nice k! Even their mashed potatoes are nice!

My carbonara comes with soup plus an order of a drink and mash potato cost only $8+! Cheap righhhhttttttt?
Posted by Junie at 5:42 PM No comments:

Located at Taka basement (near where Yoshinoya is).

There was actually a very long queue. Probably coz its a new type of fast food and everyone's eager to try it.

When the queue approached the entrance of the restaurant, there was this huge tv set demostrating how to cook the food black pepper rice. 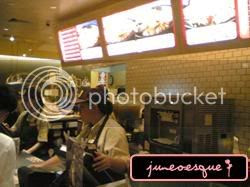 Orders are taken over the counter and food is served to u to your table on hot plates and you'll have to cook it on ur own.

We also ordered their ice cream. The sauce is some .. hmm.. sugar syrup but basically tastes like some normal ice cream sundae.

and then our orders came!

They all came at the same time and we were too taken aback to concentrate on cooking the items. To add wat sauce and how much and had to spread the button and QUICKLY start turning the food.

We also ordered their seasonal soup.. it isnt fantastic in my view. 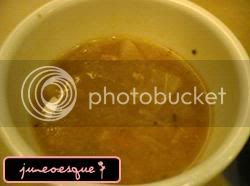 Dar dar came to join us after her work. She ordered the beef curry rice. 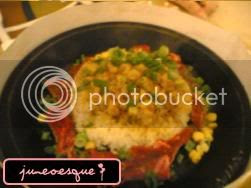 She did a much better job cooking it den Fishtank did! haha

We also ordered a Yawaraga beef. Loh gong zai did us the honour of cooking it... 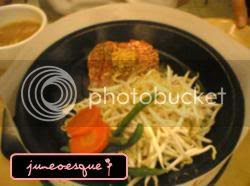 The beef from this set is totally.... TENDER!! It was so so so nice!!! I can almost say i've never tasted anything so tender!!
Posted by Junie at 5:34 PM No comments:

Met up with dar dar for supper. We had beef hor fun (standard seemed to have dropped though the beef is still ever so tender), frog leg and xiao long bao!

The girls have been raving for this cheese fondue after our previous fondue session at Maison De Poupee. 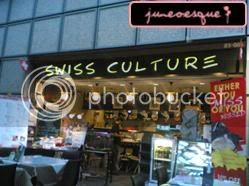 We ordered the same dippers Sorina and i had previously ordered during my first visit to Swiss Culture.

Beef cubes and german sausages. Both priced at $12 each.

The cheese went very well with the sausages and beef cubes. The girls generally liked it. But we did a comparison to the Maison De Poupee Cheese fondue taste, the Mason De Poupee one was saltier and hence, nicer. Also, compared to my previous visit with Sorina, the cheese fondue this time doesnt have this powdery taste when i put it into my mouth. *abit disappointed*

The server did tell us that this $38.80 fondue pot is only enough for around 2 person. He suggested we top up the cheese to around $54.
Posted by Junie at 5:23 PM No comments: