We went for lunch at this restaurant Bab Noodles. 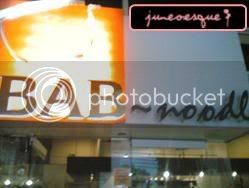 We chose this place coz the banners outside made it look good and most importantly CHEAP! haha..

They had quite a big varity of food.

For appetitisers, we had fried calamari and breaded oysters. The calamari was just ok, not super nice. The breaded oyster was quite good. The oyster taste was really strong. We quite liked it.

For our mains, this is my chicken katsu don with a tiny mini small piece of unagi. But its all for a price of $10+ so i guess its value for money. Taste is so so.... not fantastic but edible la! Filling enuff. There was alot of rice, uncle sq had to help me finish alot of the rice.

This is ah yee's vegetable curry rice with fried chicken katsu as sides. The taste was slightly better than my order but ah yee commented that Ma Maison's one is much much better. (I agree!)

Lastly its uncle sq's salmon set. The salmon is the best of our orders! Its very tasty!!! Though its without a side, the portion of salmon is very big. NICE!! 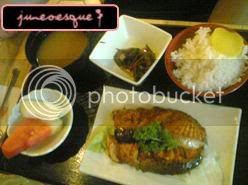 Icy has been wanting to try out Carls Jr.

Icy found the burgers all too big.

On top of the 2 burgers, i also ordered their fish and chips to try... 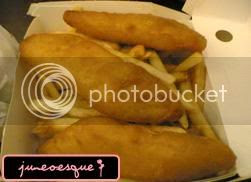 I went over to Katong Mall to locate the Awfully Chocolate shop. (Read about it from a forum) 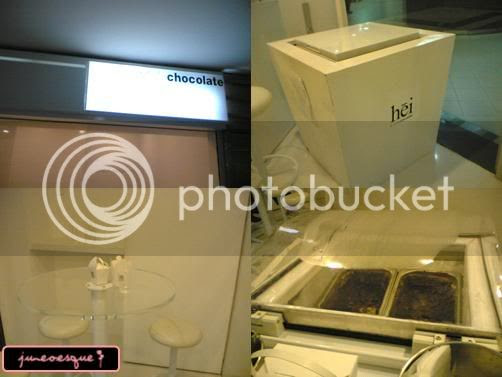 Yup.. that's the chocolate cake.. i know the lighting is not very good.. makes it look like one big black circle. If you ask me how it taste.. i .. don't find it exceptionally nice actually. 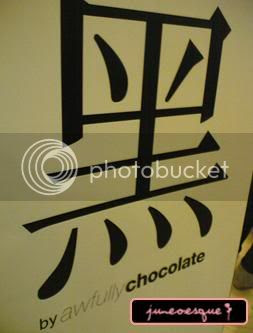 Hei is the name of their ice cream.

The greedy me ordered 2 scoops! cannot finish! I don't find it exceptionally nice also. Maybe its just me. Coz there were lotsa people hanging around to buy their cake and ice cream.
Posted by Junie at 2:40 PM No comments:

I brought dar dar to try the yummy claypot rice opposite my block.

We had lotus soup and claypot rice. Nice!
Posted by Junie at 2:23 PM No comments: 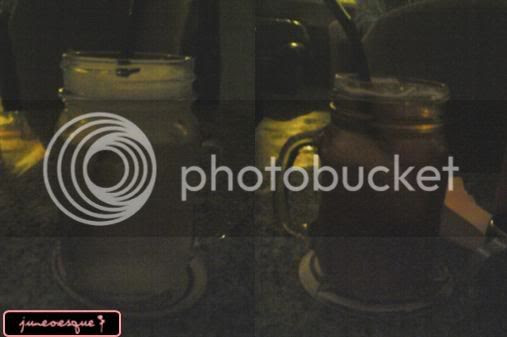 The not adventurous Jo ordered iced lemon tea and i ordered some ginseng and bird nest drink. I liked my drink. hehe.. She also ordered fries which came in a heart shaped basket. 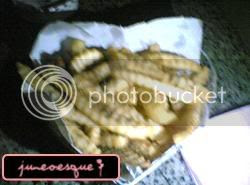 Email ThisBlogThis!Share to TwitterShare to FacebookShare to Pinterest
Labels: Cafe

Joanne and i had dinner at Ajisen Dining. 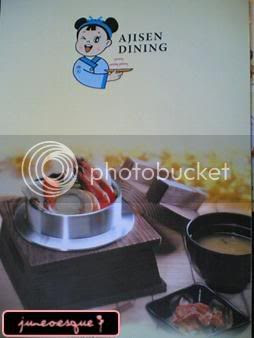 Its located next to the Bugis Fish & Co.

The service staff there were.... i would call it weird. We all felt it. There was this guy server who apparently tried to be funny, thinks hes funny.. but sadly we were not amused. 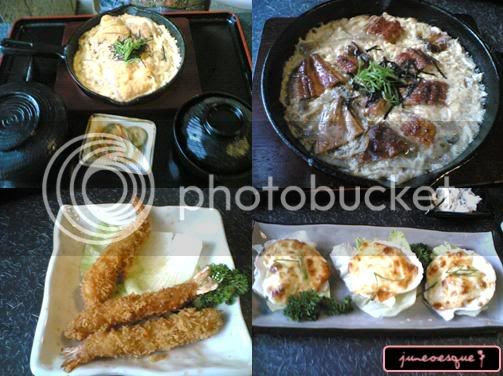 Food was only ok. Not very tasty but not lousy.

I tried something 'special'.

It did look special on the menu but it didnt look as special when it came. Can't remember the name of it. The last pic is the beansprout..
Posted by Junie at 2:29 PM No comments:

My first time there... we went in without even checking the price. She was simply just in a spending mood.

I saw something that just made me very happy! 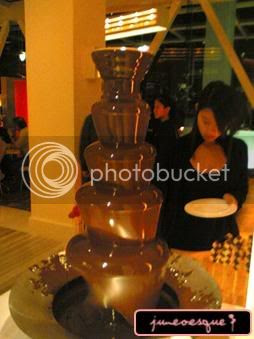 In case u're wondering what this is, this is a CHOCOLATE FOUNTAIN!!!! WOW! WOW! WOW!

Are u just as excited as me?? haha.. its not coz im some chocolate lover or something... i duno why either but i was just simply fascinated over this chocolate fountain. I just felt soooooo happy looking at it.

Melted chocolate would just keep flowing and patrons can dip sticks of strawberries or biscuits on it...

and look at the ice cream and toppings!!

This is my ice cream! 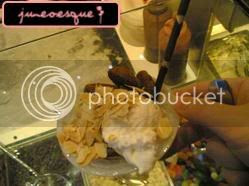 and the cakes and pastries they have. 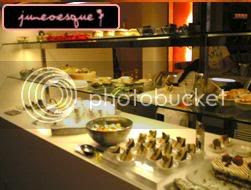 It was a really expensive dinner. Around $80 per person. The food was overall not bad. We didn't exactly eat alot coz we actually spent most of the time talking. The buffet ended around 10.30 pm but we sat and chatted till around 11.30 pm. The restaurant was a 24 hours cafe actually.
Posted by Junie at 2:11 PM No comments:

Email ThisBlogThis!Share to TwitterShare to FacebookShare to Pinterest
Labels: Buffet

Most of them ordered the set meals that comes with soup, free flow drinks and ice cream sundae. Pretty worth it i would say, $18.90++. I was contemplating if i should order the meal or the same All Star burger i had yest. In the end i ordered the same burger. I'm that faithful to my food. haha... 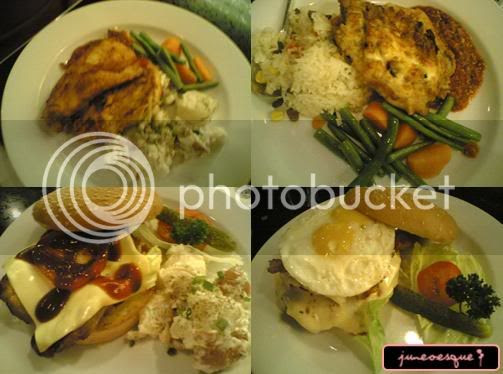 Under the server's recommendation, i also tried their milk shake. They come in 2 containers where they actually bring both and pour out the shake from the metal tin glass to the glass for you. Taste wise was actually not bad.

and the ice cream sundae for their meal. 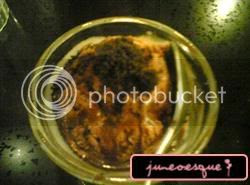 Had dinner with Cynthia at Billy Bombers.

I had the superstar burger which was huge and super duper yummy! Cynthia's meatball pasta was just so so...(in my view la). 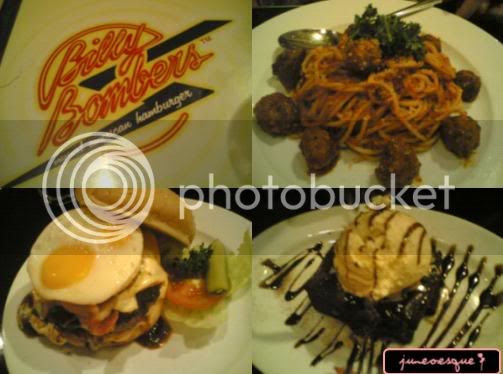 They previously had a stall at the old Marina Square foodcourt. But after the major renovation at Marina Square, they shifted to Crawford Lane. 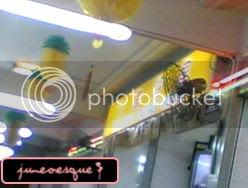 I know this isnt really a very clear pic of the coffee shop but paiseh la. Stand infront of the coffeeshop take pic. haha.. i took it from the side.

I personally prefer it to the bedok 85's one. Love it with lotsa lotsa vinegar!
Posted by Junie at 3:56 PM No comments: 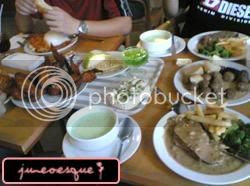 Aside from the main dish per person, there was another plate of large meatballs, 8 chicken wings, potato salad, 2 bowls of soup, 3 dessert! hhahahhahaa.... 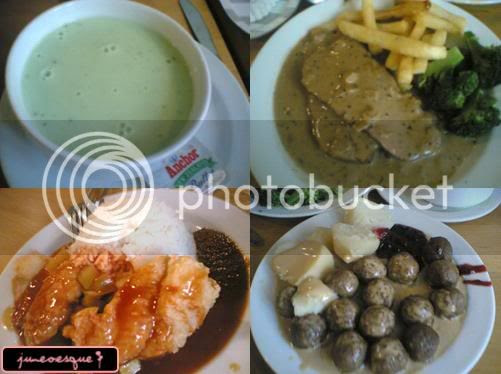 and the chicken wings and desserts.. 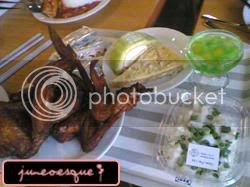 gotta rave about that piece of green cake u see there. Its called Princess cake.. its top layer is a layer of kaya like paste. Very nice!! The almond cake immediately loses its taste if u try it after the princess cake!
Posted by Junie at 3:48 PM No comments:

Went down to Swee Choon with shi xiong again....

Dim sum supper. Tried a new dish that we didnt try previously. Mee Sua Kuay. Not very nice. I mean, its not to my taste. Maybe others will like it but we didn't. But i love their beancurd prawnroll and fried wanton! hehe...
Posted by Junie at 3:44 PM No comments:

Then we were deciding between Bakers Inn and Gelare. Decided to go for bakerz inn. Our sins are listed as below..... 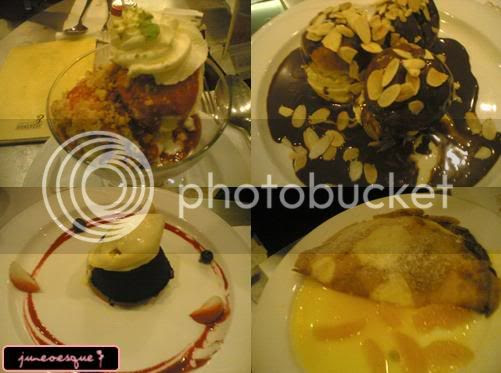 haha... i had cheese ice cream. Its very nice! Especially the crumbs by the bowl. I cant remember the names of the rest of the items except for the warm chocolate cake which was also really nice with chocolate ozzing out. The rest of the items were not bad also.
Posted by Junie at 3:42 PM No comments:

Today, outside Tao, there's this stage where a couple of singers were performing. They sang beautifully. These are probably xin yao ge shou. I'd say, the owner of Tao sure has a way of doing business. Nice food, excellent service, creative ideas. 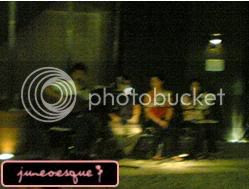 We ordered all 4 different soup and when we tried to place soup together to take pictures, the fish soup bowl especially stood out coz its so small! haha

I didnt take pics of the rest of the food coz they are pretty much the same as those in the first and second visit.

For tea, the new tea tried is mint grassjelly. Pretty refreshing but not to my taste. I prefer the rose apple tea. 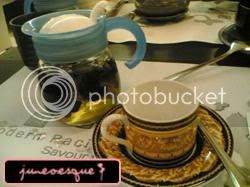 Gotta say that the service today at Tao didn't feel as great as the pervious 2 visits. There was this particular male staff whom i've never seen on my previous 2 visits who wasnt as polite as the rest of the staff. Also, when he was serving us our mains, there was a time when he was spilling the sauces on the table but he didnt even try to clean it away or apologise. The rest of the other staff were great though.
Posted by Junie at 3:38 PM No comments:

Email ThisBlogThis!Share to TwitterShare to FacebookShare to Pinterest
Labels: Western

Met up with dar dar and Andy zai for dinner at IKEA. 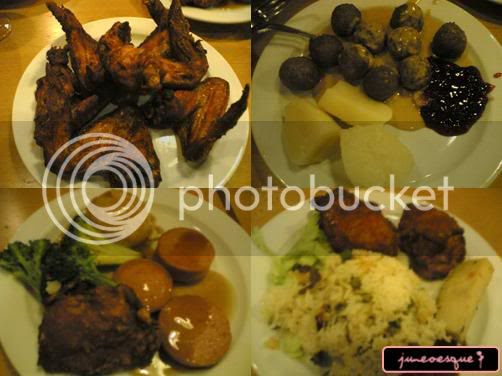 can never go wrong with IKEA food.
Posted by Junie at 3:34 PM No comments:

I met up with Lea, Diane and Elyn today for lunch at Maison De Poupee.

Diane ordered their set meal which consisted of soup of the day, grilled fish and ice cream. The rest of us were pretty full so we only shared the fondues.

Didn't manage to take a pic of the ice cream coz my fone hanged for awhile and Diane happily finished her ice cream. haha... 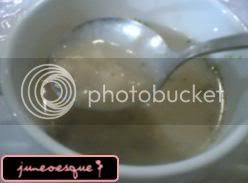 I had a mouthful and Diane complained abt the clumps in the soup which were probably a result of insufficient stirring.

But the grilled fish was very nice! Very tasty. The sauce went very well with it.

Lea and myself ordered drinks... Lea ordered iced honey lemon. I ordered Rambutan Freeze. It was quite nice. I quite like it. Not too sweet. 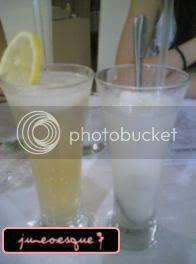 Of coz, we ordered fondue as well. We ordered the chocolate fondue, tiramisu fondue and cheese fondue.

The chocolate fondue is much much better den my previous visit with Sonia and Seth. Its much thicker and not as watery.

The tiramisu fondue was not hot enough even after we asked for it to be reheated. The taste was alright in my view but Diane and Elyn didnt like it at all. Lea found it ok but after Diane and Elyn 'discriminated' the tiramisu fondue, a negative perception of it developed in all of us. haha...
The cheese fondue was already hardened as soon as it arrived. We could barely stir it. We asked for it to be changed and the person changed it for us readily. 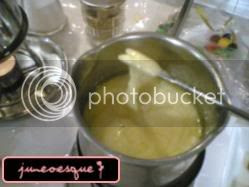 Now this is better but it did still harden much faster than our previous visit so we had to really rush through to finish the fondue before it hardens. But it was still very tasty. This is the first time Lea, Elyn and Diane were trying fondues and im glad they like it.

We had marshmallows, almond nuts, bread, M&Ms chocolates, strawberries, bananas, peaches, kiwis. We requested for the M&Ms to be changed to bread because bread was the one that goes well with all the fondues.

This is the sticks we used for the fondue. This time we got the strawberry one. 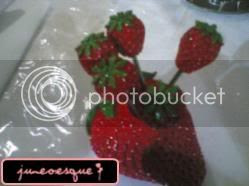