We headed to TWG for dinner..

the cod fish was nice. the mashed potato that came with it was good too. the sauce went well with both the fish and the mash.

we also shared a seafood lagsana...

the seafood lagsana was quite special as well. I guess for TWG, given tea is their key product, they try to infuse tea in their dishes. For their lagsana, they had infusion of the moroccan mint tea. I quite liked it.


we did lunch at Tunglok Xihe at Turf City. We had wanted to head to Dancing Crab but sadly it wasnt open for lunch.

in comparison, i found the food standards of Tunglok Xihe at Orchard Central better than that of the branch at Turf City.

This is the drunken chicken..

overall, i like the taste of this and i like that its chicken in a sliced roll, boneless making it easy to eat. But i recall when i had it at Orchard Central, it was more juicy. Today's one is a bit dry.

i like it! its boneless too and its very tasty and soft. the centre part had some haybe hiam kind of thing. its good!


we also had a spicy and sour soup with a hand carved beancurd flower....

Bernard saw the picture of me posting this on fb during my previous visit and was keen to try. Again, the taste of this dish was much better when i ordered it at Orchard Central previously. Today the soup was quite bland.

i found the fried rice not impressive but Bernard found it alright.

and of course, the roast duck. I would say this is one of their speciality and if you only have a small group and don't want to order a whole duck, you can let the server know and let them match you up with other patrons. If there's another table who is also keen to order half a duck, you can share the order....

the duck will come with shavings of the duck leg, the skin and some breast.

it will also come with a round plate of condiments and sides where you can match with the duck...

overall a full and delightful meal!

Email ThisBlogThis!Share to TwitterShare to FacebookShare to Pinterest
Labels: Chinese


we went to check out Pince and Pints along Duxton Hill.

No reservations. Walk-in only.

and like almost everyone else, we ordered " Everything on the menu please! " (feels kinda shiok saying this.. haha)

first up is the chilli lobster...

the chilli lobster was served with man tou. It was so so. The chilli sauce wasn't impressive but the lobster was fresh.

and Wendy was excited about the lobster roll...

the bun was awesome! the bun was really really good! its soft and fluffy! the lobster mix was decent. Maybe Wendy squeezed too much lemon so it was quite sour, i didn't like the mixture as much but the bun was simply lovely!

and the grilled lobsters...

I love the yellowish sauce they had which went very well with their fries.

Overall, its a decent meal but not what i would rave about, taste wise. But i must say their service is excellent. Very pro-active and friendly servers that made it a good experience.

Email ThisBlogThis!Share to TwitterShare to FacebookShare to Pinterest
Labels: Seafood

its a short catch up with Mindy after work. She suggested checking out this place Roosevelt's Diner & Bar located at the Dorsett Residences

the interior of the place...

considering its location, i must say it is pretty crowded for a weekday night.

while wait for me, Mindy had ordered the calamari first...

the batter was thin with pepper bits. the texture of the squid was pretty good. it was rather soft. i quite liked it.

for mains, Mindy chose the ribs. I must say im typically skeptical of ordering ribs because not many places can do it well but Roosevelt did it pretty well!

the ribs had meat and it was tender.

as for me, i was drawn by the name on the menu truffle fish pie. wow.

so that was what i ordered...

i like it. the pastry was fragrant, crispy and soft. it was good. the sauce inside was creamy and a little sweet. I would have preferred it to be more savoury but overall i liked it.

Today Squiddy and i are going to check out the Mouth Kitchen restaurant at Plaza Sing that she has told me about for the longest time because it was said that they have squid ink porridge and squid ink char siew bao!

the sound of it is exciting!

the picture in the menu looked really good and looked like its some prawn cordon bleu with a ham centre.

But like they always say, pictures on menu are just for illustration purposes. the actual thing looks like the above and taste nothing like i imagine. basically just 不好吃. haha

i had loads of visualisation on how it may taste. Well, there was no squid ink taste at all. It tasted like a normal porridge just that its black in colour.

Squiddy said she found it alright while i felt kinda disappointed.

i felt that this was good! the truffle taste was relatively strong and the fish was soft.

again, tasted like a normal char siew bao which is black colour.

it appeared to be the hairy crab season so we ordered one. it was really small in size but what was good was the server managed to break it down for us very nicely....

it was really small, not much meat or roe. Also, maybe because of the hairy crab, there were loads of flies flying around. quite annoying. 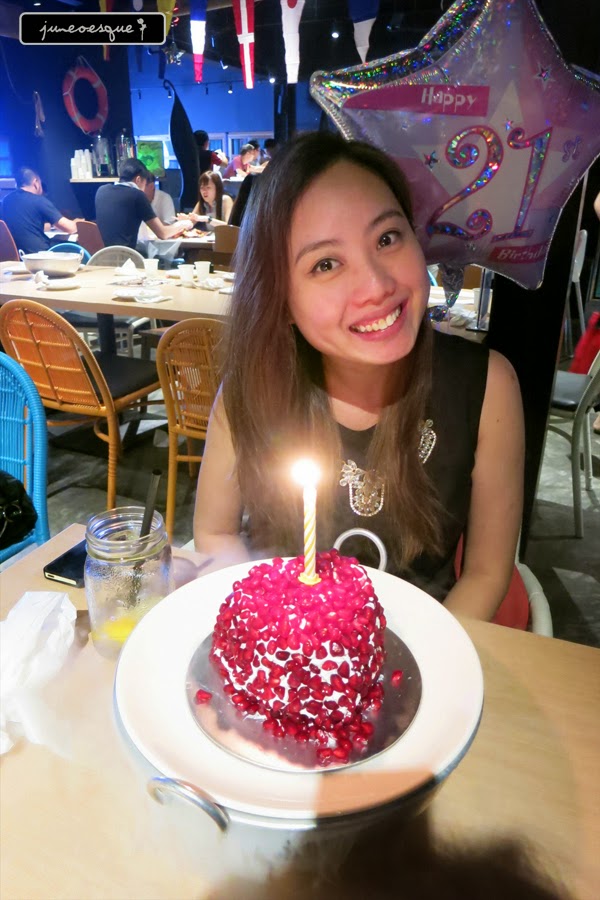 The cake is a pomegranate cake in a lovely heart shape that i bought from Laman Delight's. I don't know if they are the only Russian Cake shop in Singapore but their cakes are crazy good. Always moist and yummy! Its not cheap but its just so good!


Today i meet up with Joanne to celebrate her birthday and we checked out the current ever popular Louisiana style of seafood.

You most probably would have heard or tried a couple of the popular names like Cajun King, Full of Crab, Crab in a Bag etc.

Today we headed down to Dancing Crab which was under Tung Lok. I must say, with the Tung Lok's endorsement, it sips in an element of trust. 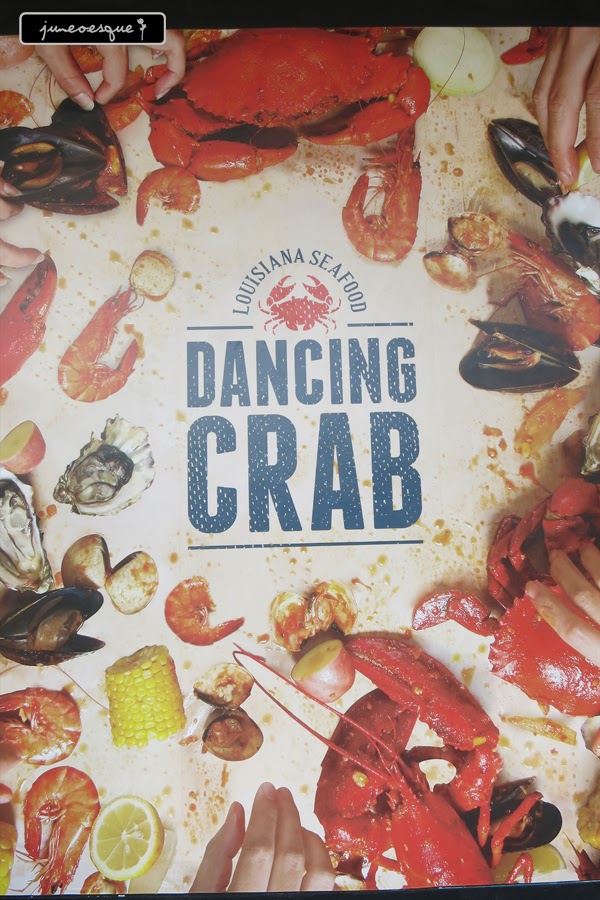 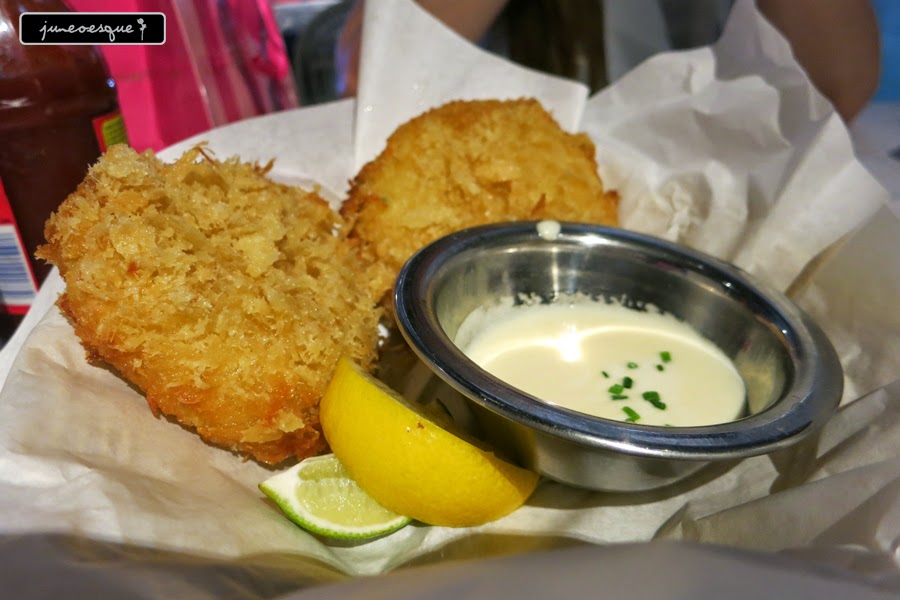 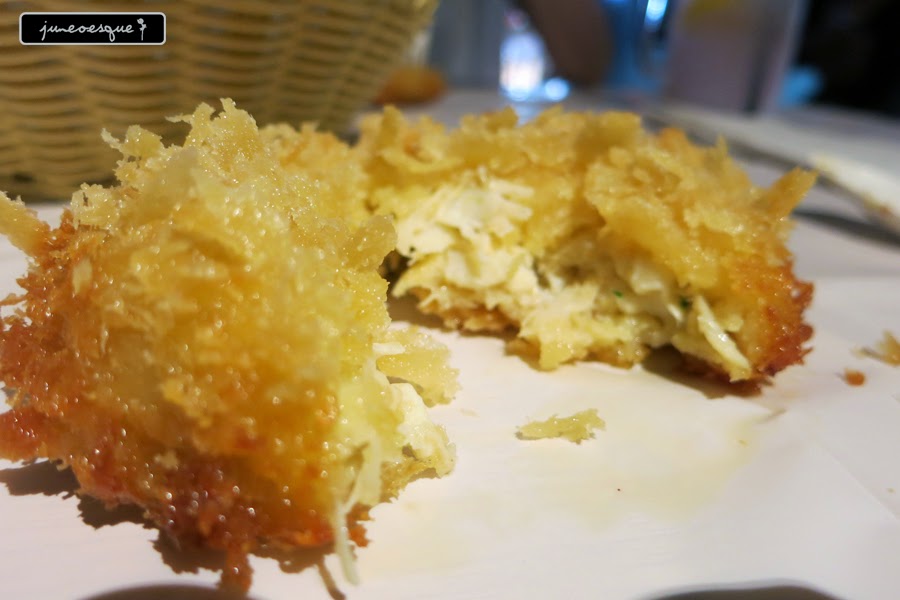 Joanne felt the crab cakes were good. i found it ok, i didn't think it was superb, maybe i prefer a more crab-ish taste or chunkier meat. But i spoke to Bernard about it at a later point, he thought it was good too. I liked the sauce though.

we also ordered a lobster in their crab sauce.... 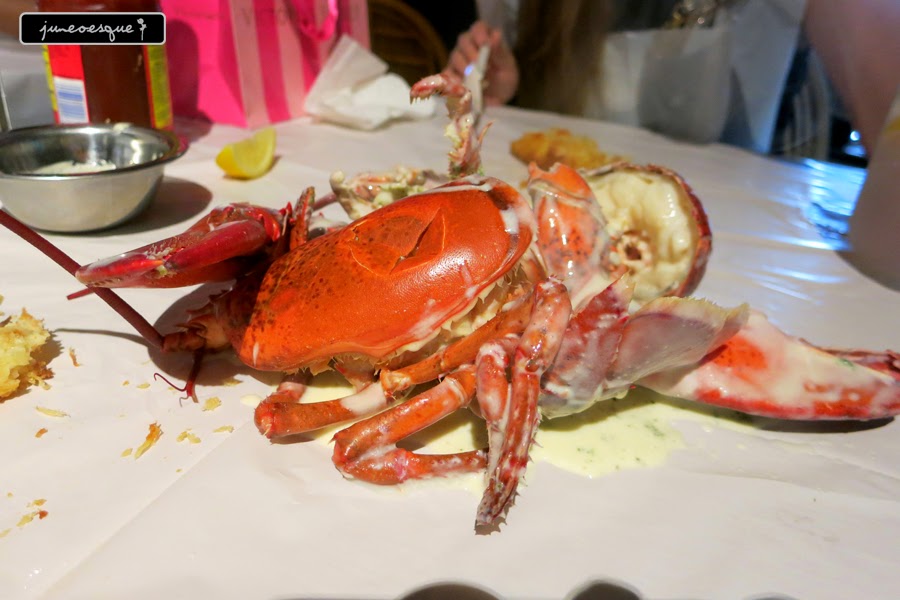 That was superb! The size was just right, the sauce was yummy and the meat was succulent. Thumbs up! and btw, Lobster is IN. haha

we actually also went for one of their Combo (S$80) which comes with a Sri Lankan Crab, 300g prawns, 250g mussels, potatoes, corn and sausages.... 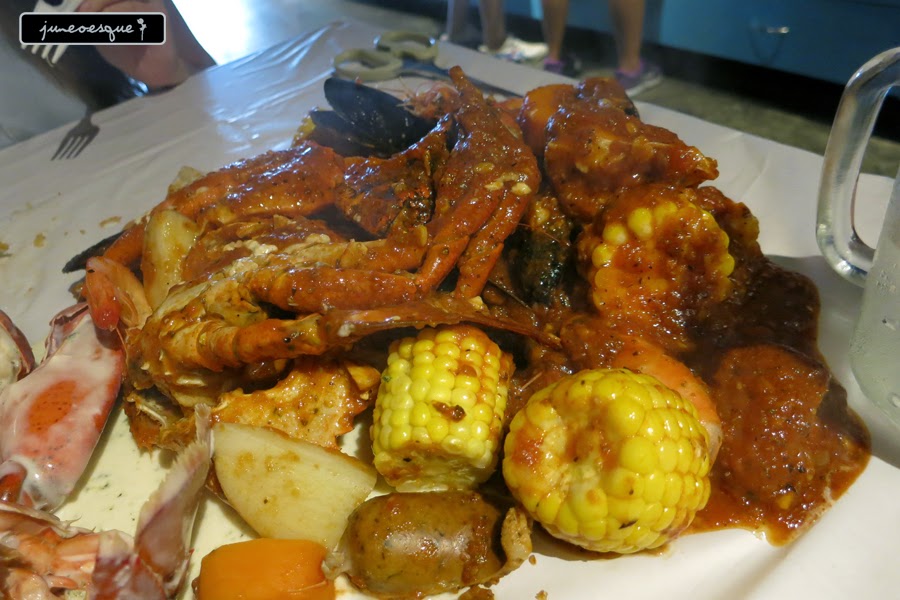 And as you already know, its served in a big plastic bag and you are expected to use your hands and dig in.

I liked the idea it was Sri Lankan crab. I guess my previous experience at Cajun King on the dungeon crabs left a bad impression so i wasnt that adventurous in terms of the choice of crab. The dungeon crab we had previously at Cajun King was skinny and hairy, not much meat yet very expensive. So if you ask me, im happy that they have Sri Lankan crab cooked in the louisana style of sauce.

The crabs included in the bag were really big and succulent as well.

We chose the mild spicy Dancing Crab Signature sauce. I pretty liked it. It was not too spicy and had some tomato taste. I think its pretty good! 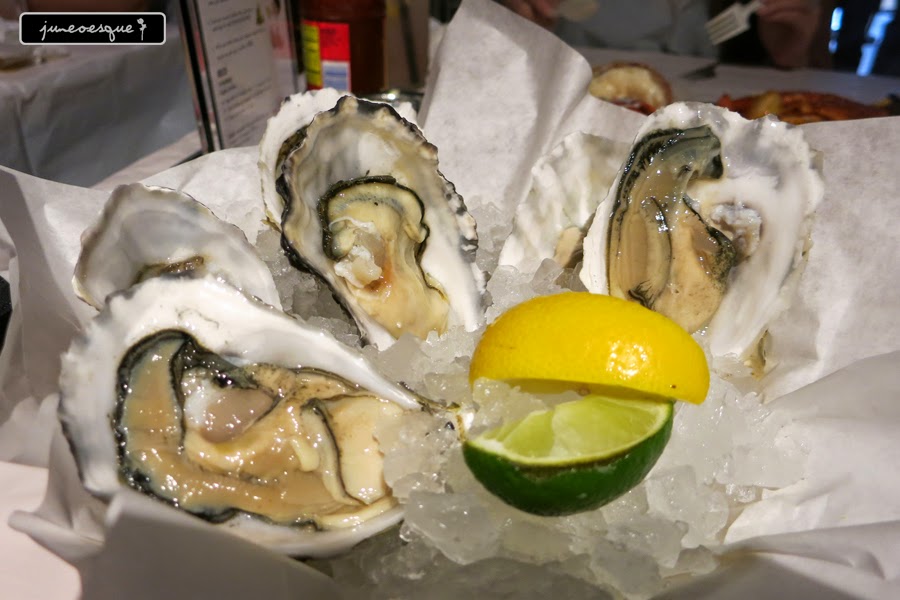 THE OYSTERS ARE CRAZY AWESOME! They are BIG AND FRESH! crazy good! Makes you want to go for seconds! and it appears it's not just me, had conversations with my cousin Wendy and my Bernard subsequently on different occassions about Dancing Crab and they both agreed the Oysters created an impression. It will make you want to go back for more! 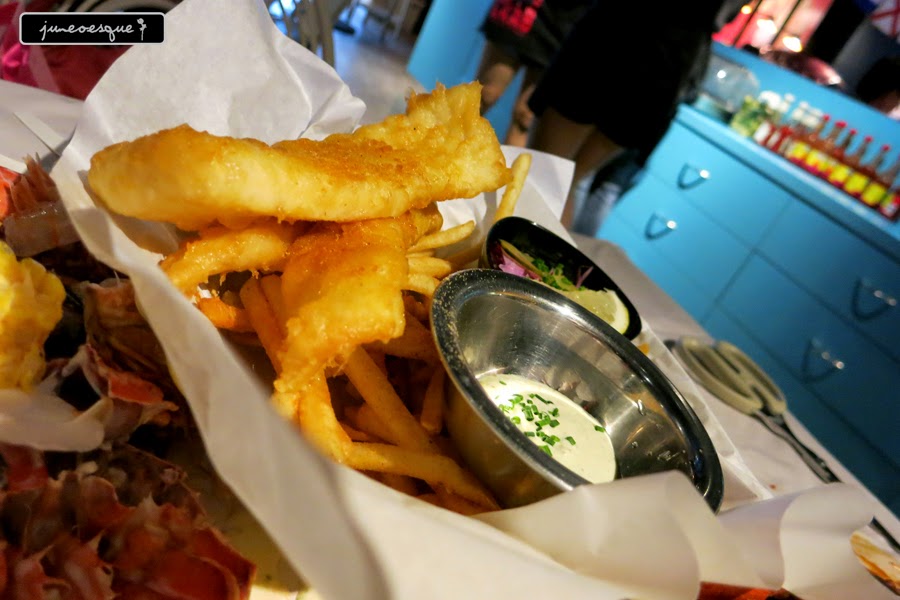 and because we didnt have any carb, we ordered a Cod fish and chips as well. It was really yummy too and i loved their sauce.


And after conversing with the server, we decided to give his recommendations a try, to try this stone crab that he assured me it's defnitely sweeter and more meaty than the dungeon crabs i tried previously at Cajun King... 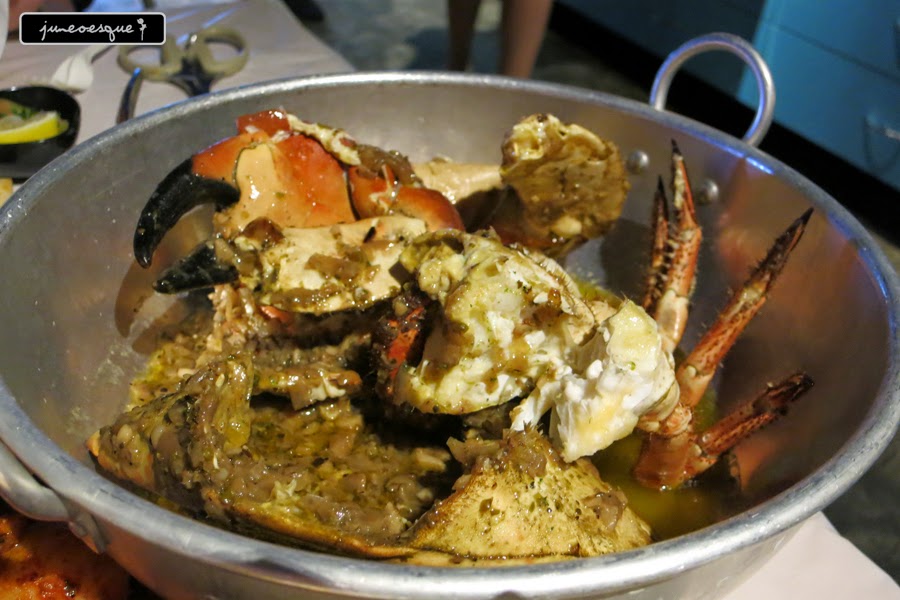 I must say the stone crab was indeed pretty good. The meat was tough and went well with the sauce!

By the way, ought to have a disclaimer that its not that Cajun King was not nice. I totally loved their calamari but maybe i didnt order the right kind of crab, i didn't enjoy the seafood bits as much.

Overall i must say it was a good meal! And i probably forgot to take pictures of our drinks but they have a lavendar lemonade drink that was really good. Its very fresh and appetising with that tinge of lavendar that didn't make it taste like aroma therapy. It was really good. I will order that again if i head back.


The staffs were also nice to serve the cake that i had previously arranged for Joanne to be served in a rather special way. They had it served on a plate with dry ice below so there was smoke and all.... 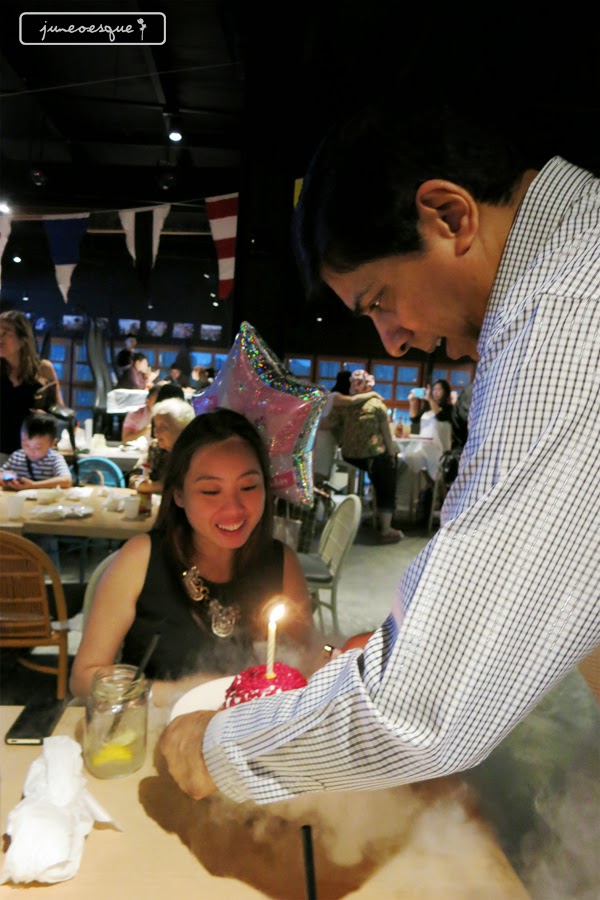 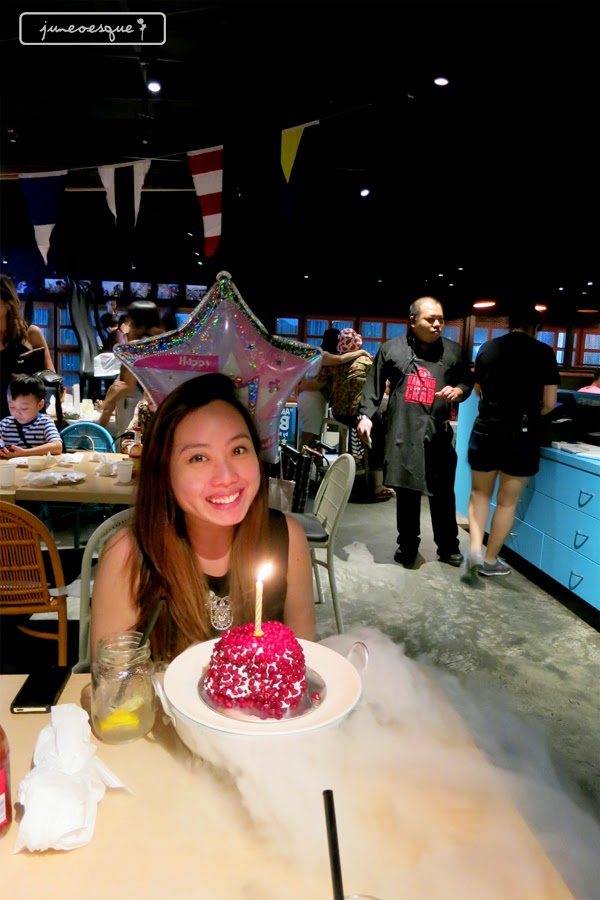 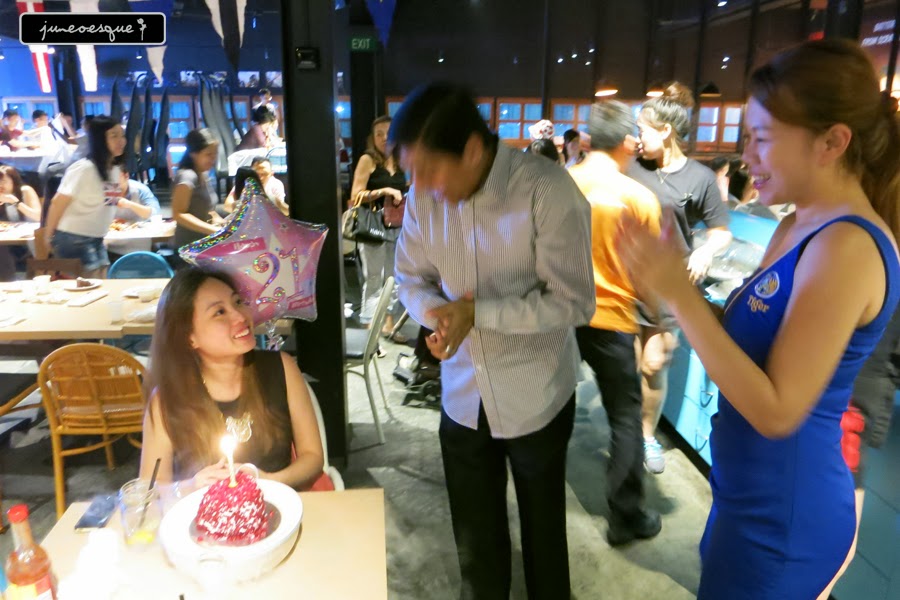 Service got better towards the evening, they also did the full works of singing her a birthday song and all. And even though they gave a timeline as to what time they needed the table back, maybe because we kept ordering they didn't chase us away. And of course, we couldnt finish all the food so i packed some back to let my parents try but let's just say they prefer our typical chilli or butter crab. haha